Posted by WOLFGANG HOUSTON WEST at 3:13 PM No comments:

Email ThisBlogThis!Share to TwitterShare to FacebookShare to Pinterest
Labels: for lease, retail-space-leasing, strip-mall-retail-shopping-centers 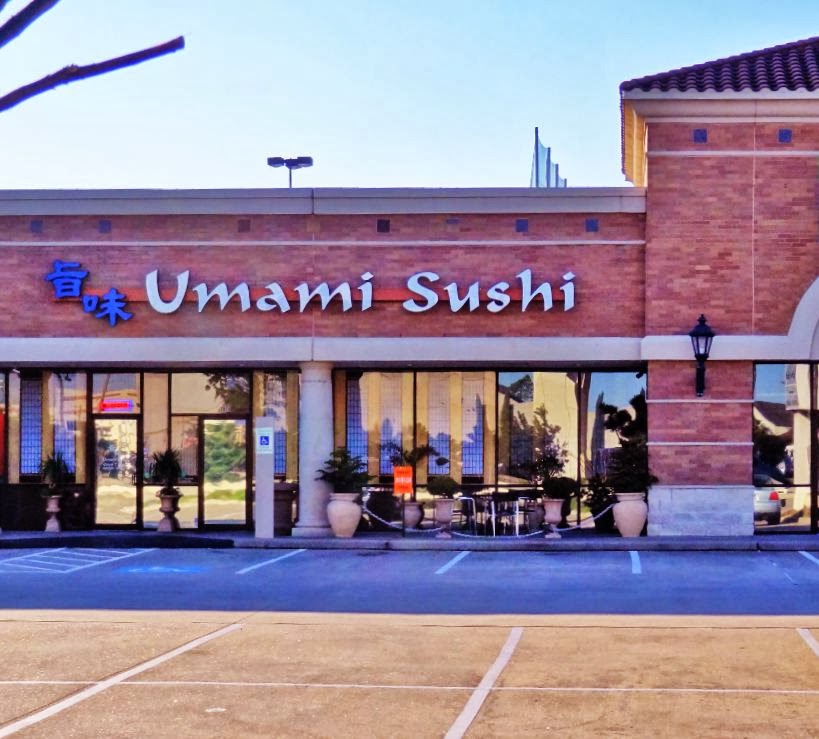 Posted by WOLFGANG HOUSTON WEST at 11:30 PM No comments:

Restaurant Closings: Making a go of a restaurant venture is tough, even with ongoing West Houston construction boom

Notwithstanding the current construction frenzy, and the bright prospects for growth in the Energy Corridor and surrounding areas, numerous restaurants have failed or otherwise closed in this part of town too.

PLENTY OF DEFUNCT RESTAURANTS IN AND AROUND THE ENERGY CORRIDOR TOO

The restaurant business is a tough business to make it in, even in an area like the Energy Corridor, which is booming with construction and bracing itself for the influx of thousands of more workers and residents. Several large luxury apartment developments are under way, in the preleasing state, or already open for business and move-in. Others are breaking ground or about to. Cranes dot the horizon everywhere one looks as new office tower sprout from what was until recently overgrown vacant land North and South the Katy Freeway.

The population in the areas must have been increasing for a while because the addition square footage is not a novel phenomenon. Domain on Eldridge opened last year, and before that luxury residential development there was Eclipse, and Broadstone Memorial a bit farther North past Memorial Drive.

Numerous new restaurants have opened over the course of the last couple of years, especially on Eldridge Parkway, the last addition being a Chick Fil A in the parking lot of the Kroger Store at Briar Forest and Eldridge, right across one of the new apartment complexes that is nearing completion there. Not to mention the increasing congestion on Eldridge, Briar Forest, and Highway 6 during rush hour, -- a tell-tale sign of the economic vibrancy of the local employment market.

But it seems an equal, if not larger, number of eateries and dining establishments have folded. Here is the RIP or-shall-we-say memory-lane list:

Benny's Mexican Cafe on Eldridge Parkway just North of the intersection with Westheimer (vacant for many months, but currently being remodeled for some other purpose). 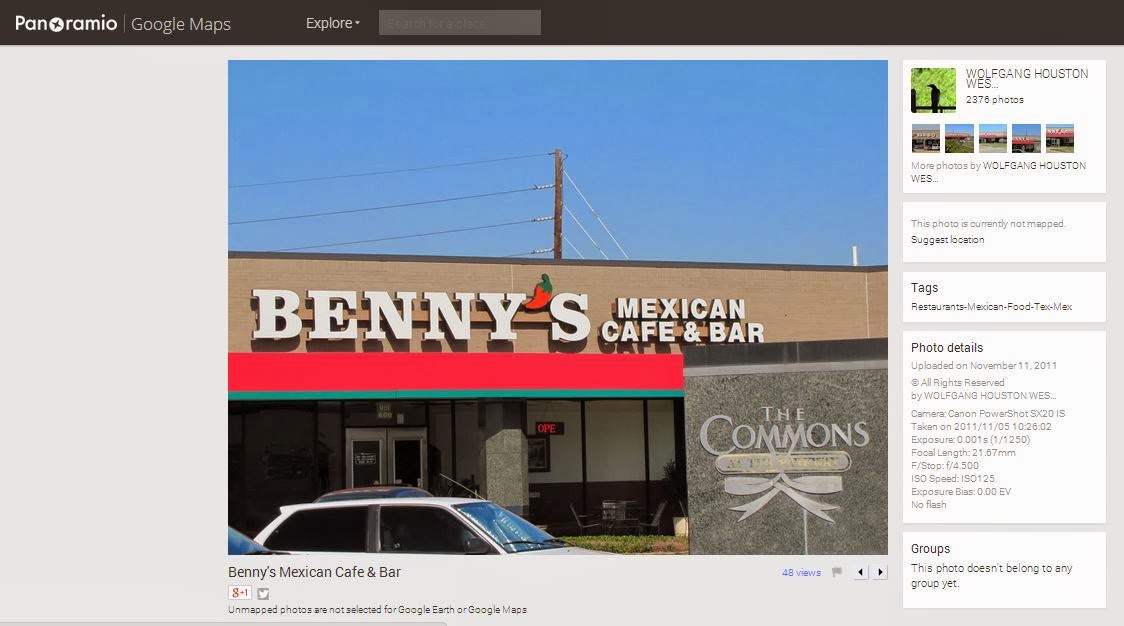 Alma Cebiche, a Peruvian concept, made a brief appearance in what was Chatters Cafe near the CITGO campus. Now it is back to Chatter's. 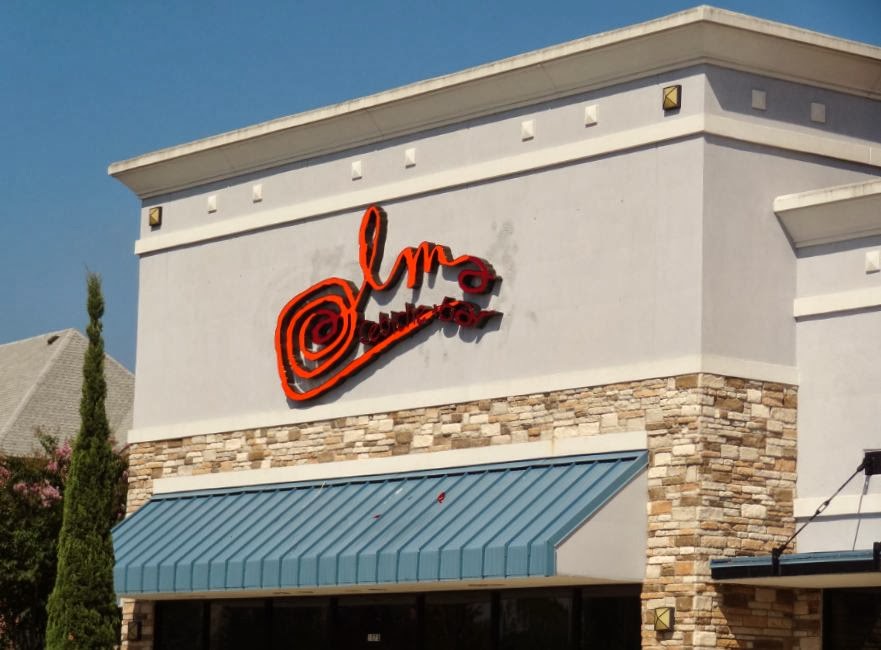 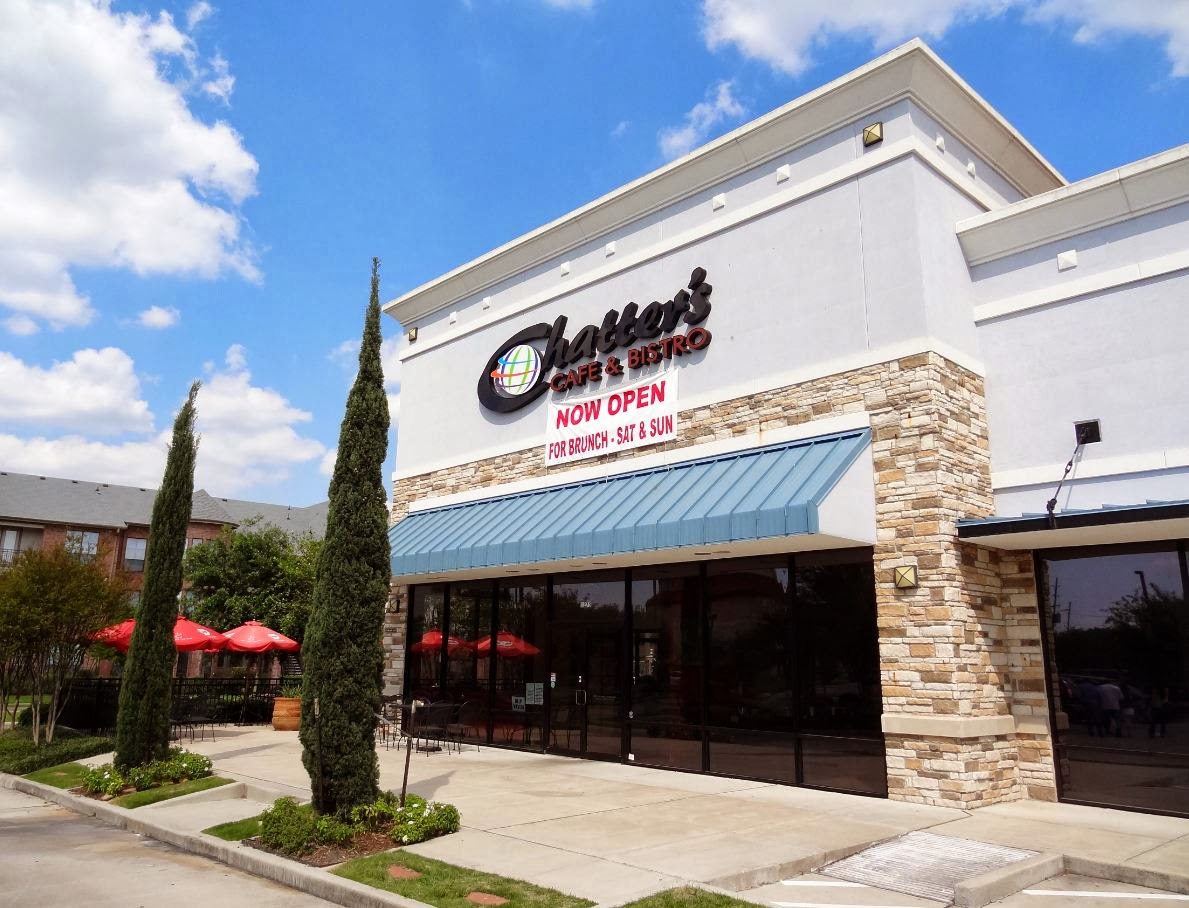 Sharky's American Grill on Eldridge at Enclave, took over space from Enclave Sports Grill in 2011, but did barely lasted for a couple of years as the landlord's lockout notice posted on the door early this year attests. 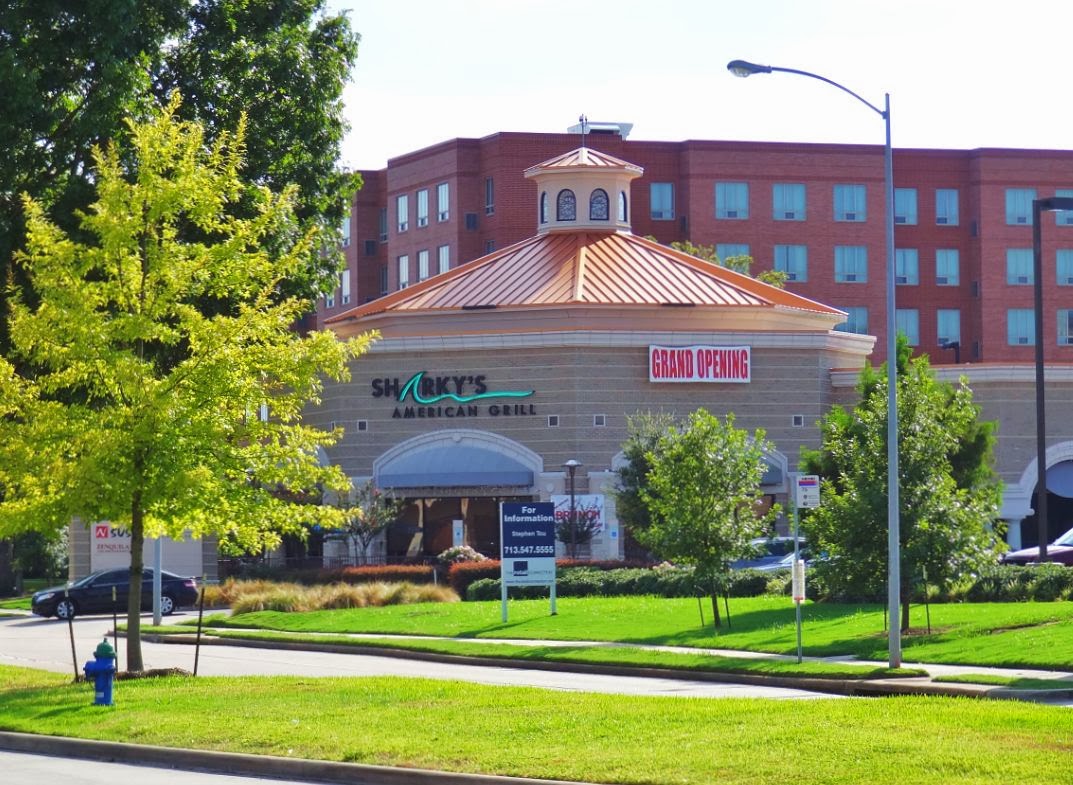 The Cattle Guard Texas Restaurant between Drury Inn and the Wyndham hotel on Highway 6 Northbound between Katy Freeway and Park Row. As of Feb 2014, the property is posted for lease. The iconic Astroworld duck-on-wheels (with flat tires) is also gone from the parking lot fronting the highway.

On the other side of the Katy Fwy overpass, the restaurant that used to occupy the end-cap space of the corner of Park Row and Highway 6 Southbound. The space too awaits a new entrepreneur.

Sombreros, the Mexican Grill and Cantina on Park Row just West of Highway 6. 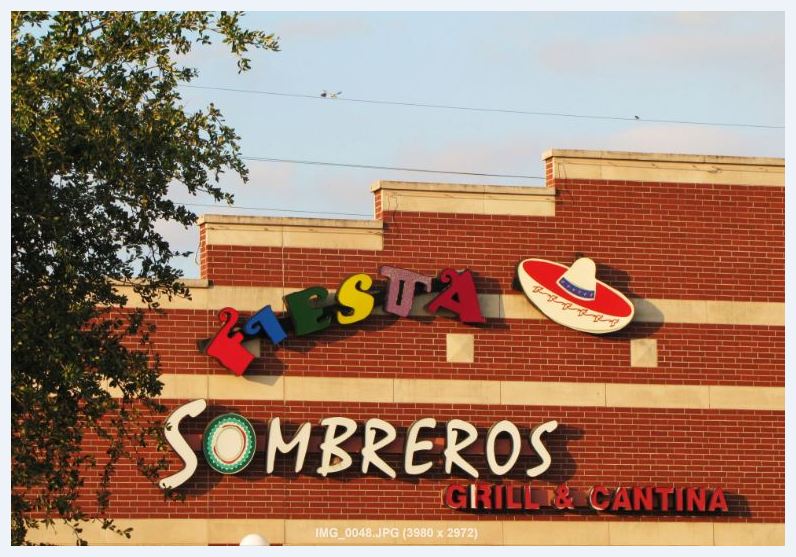 Timmy Chan, a fast-food Asian food joint with drive-through on Highway 6 North of Westheimer (boarded up and posted for lease).

Nardino, the Italian Restaurant on Westheimer across from West Oaks Mall in the Strip Mall/Retail Center along the route to Westheimer Parkway and George Bush Park  It's now something else.

The Mexican Restaurant behind the Wendy's Westheimer location between Eldridge and Highway 6 appears to be under new ownership or management: there is a new name up again, the third in just a few years. It used to be Mi Luna or Dos Lunas, and a Tapatia franchise before (if I recall correctly); now it's something else, but still Mexican or Tex-Mex.

Hibatchi Buffet, the Asian all-you-can-eat venue designed for high-volume traffic on Westheimer between Synott and Eldridge is history. The building, which abuts Westheimer is boarded up and the letters of the signage on top wrapped in super-ugly blue tarp. A veritable eyesore. What was the landlord thinking?!


La Prima Grill on Westheimer Rd. in Houston near the intersection of Westhurst Lane and Ashford Hills Drive. It was a brief interlude. The space, in which others have previously failed, now features a make-shift banner declaring its transformation into an "Urban Cafe".

And while we are on Westheimer, we note that the Slick Willie pool hall, though not an eatery, closed too, and is looking for a replacement tenant.


And then, for good measure, there goes Chuck-E-Cheese on Memorial at Dairy Ashford. That's gone too now. Sorry kids.

Posted by WOLFGANG HOUSTON WEST at 12:30 PM No comments: 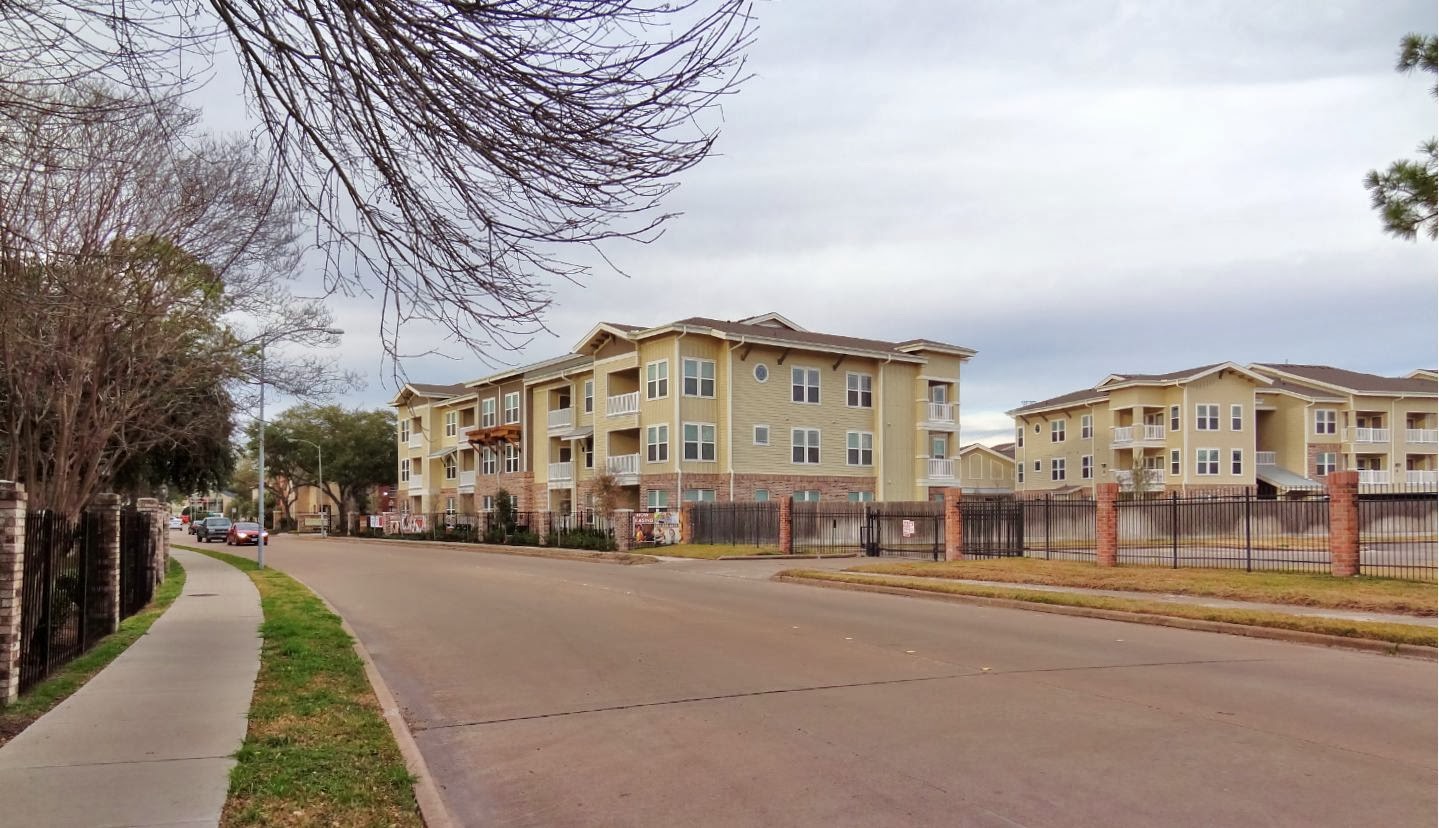 Like elsewhere in Houston, this new residential development
is branding itself by its street address 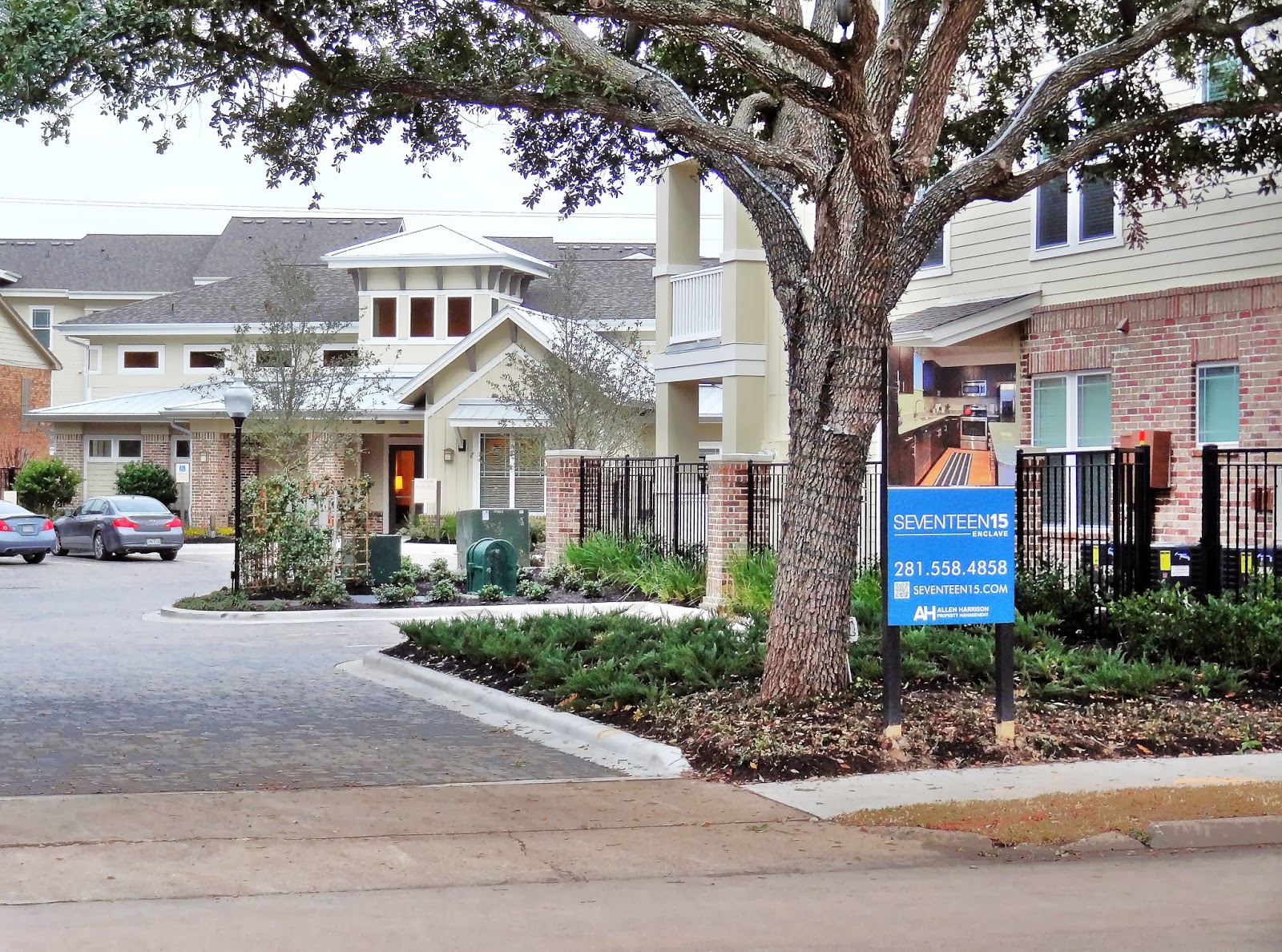 Posted by WOLFGANG HOUSTON WEST at 6:30 AM No comments:

Chipotle on Eldridge at Enclave Parkway (near KBR Office Building) 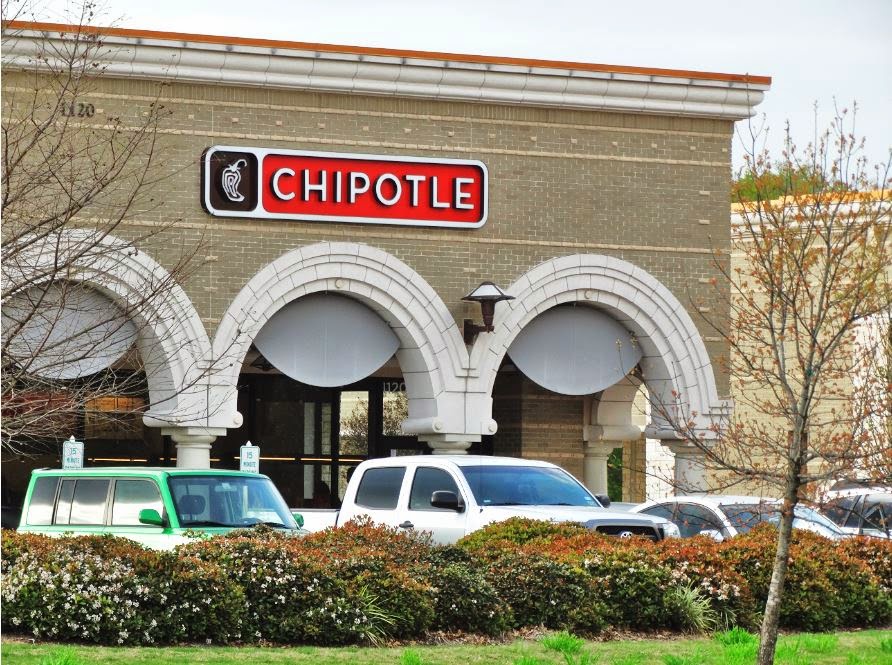 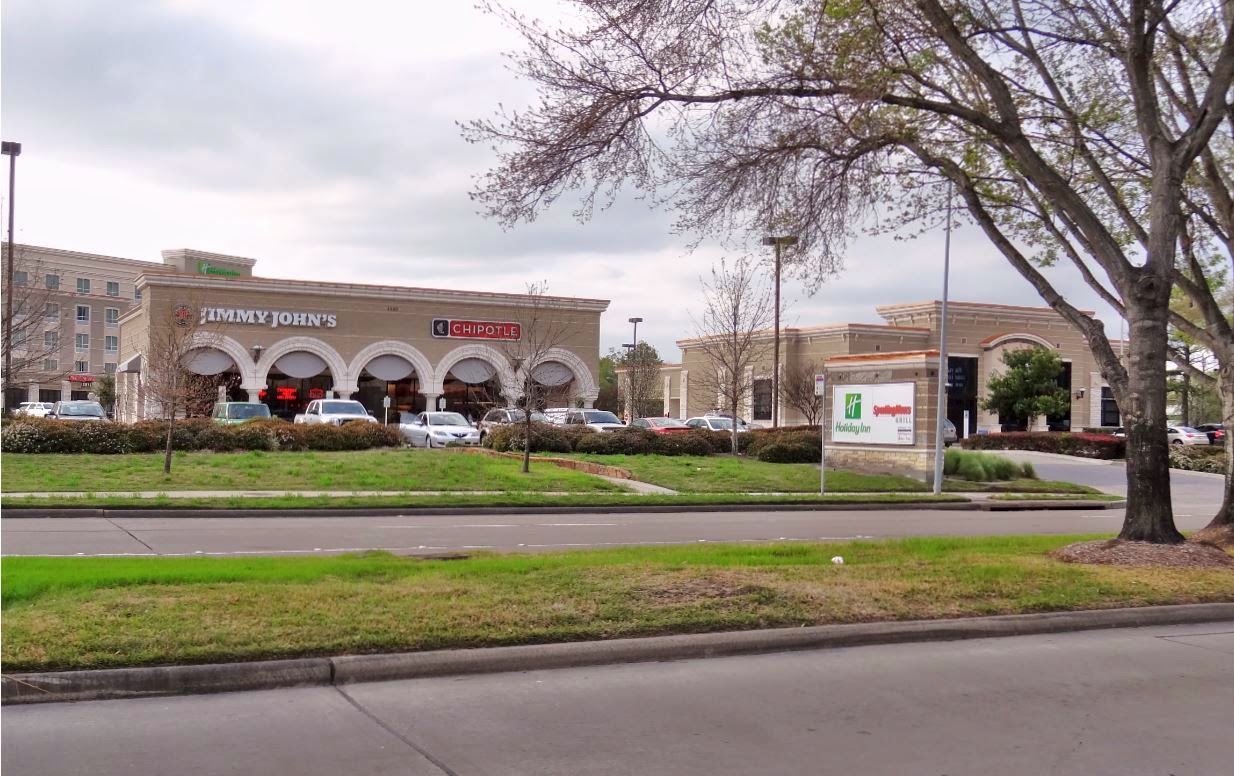 Posted by WOLFGANG HOUSTON WEST at 2:30 AM No comments: 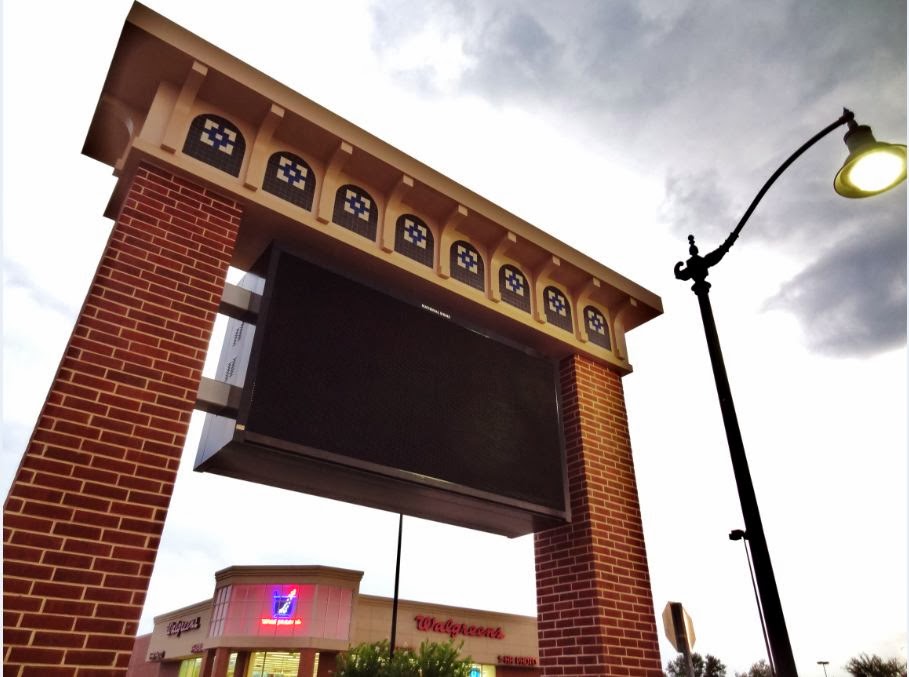 Posted by WOLFGANG HOUSTON WEST at 9:30 PM No comments:

In anticipation of hundreds of new residents moving into the luxury apartment complexes nearing completion on Briar Forest between Eldridge Parkway and Highway 6 (Alexan and Elan), a newly constructed Chick-Fil-A restaurant opened its doors February 20 on the South side of the Kroger parking lot. It has two drive-through lanes. The new fast food restaurant joins La Madeleine just a bit farther West on Briar Forest; Tossed right on the corner, and three other restaurants on the Eldridge Parkway side that have in business at the Briar Forest/Eldridge location quite a bit longer: The Pecan Grill, the Bamboo Garden Chinese Restaurant, and a McDonald's.

Posted by WOLFGANG HOUSTON WEST at 11:17 AM No comments:

Looking for Fish Oysters Lobster and Crawfish along Highway 6 ? 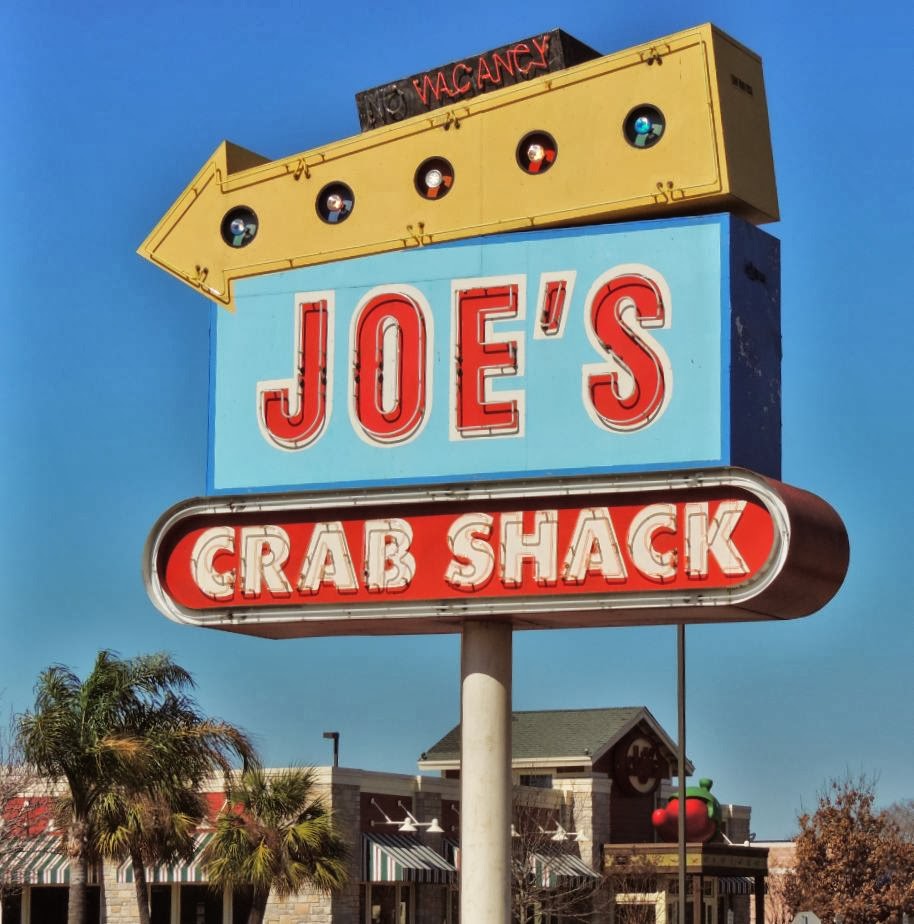 Although there are fish and other water-inhabiting creatures in the lakes in George Bush Park, and in Buffalo Bayou downstream, you can leave your angling gear at home, and leave the fishing in the murky waters of the bayou to the herons and egrets. They are experts at it, for they do it all the time. For those who prefer to have the catch delivered ready for human consumption, there are plenty of seafood lunch and dining options on State Highway 6 (SH-6) North and South of Westheimer and up to Katy Freeway.

Here are some, and they don't include sushi: 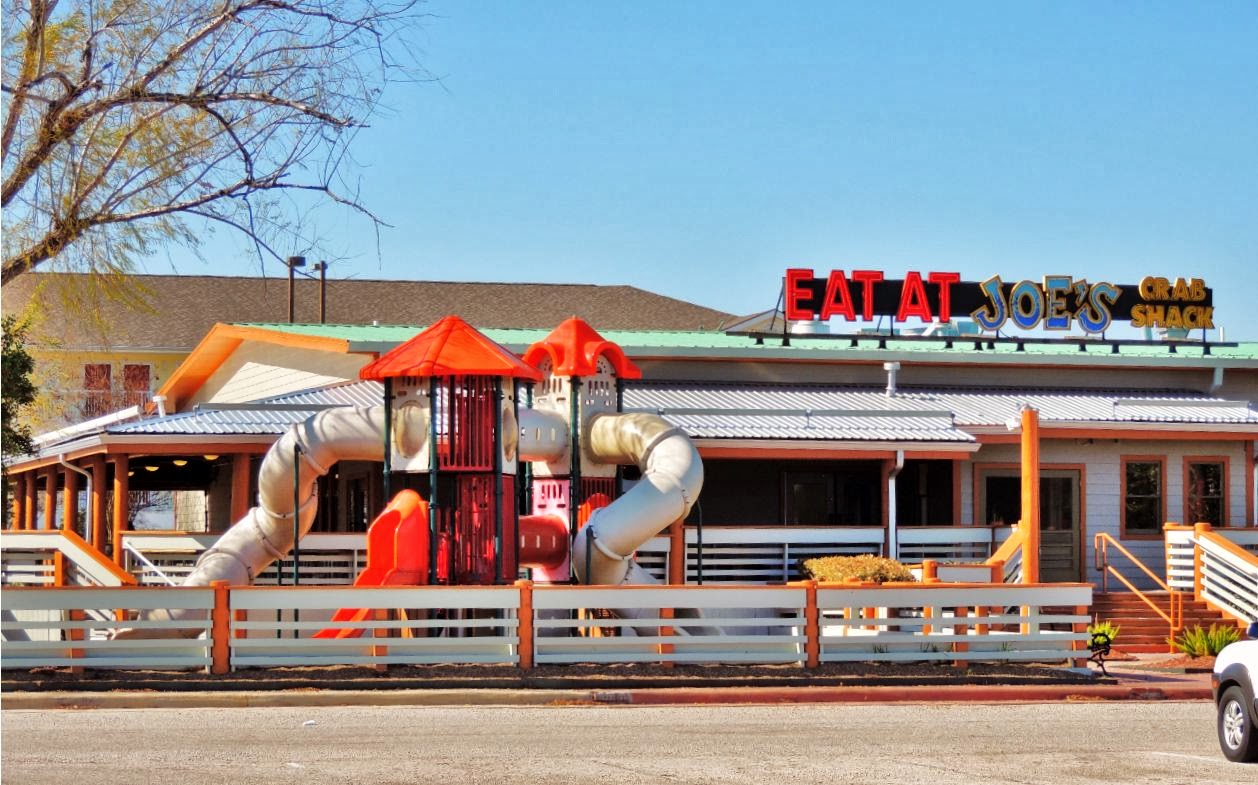 Joe's Crab Shack even has a playground area for kids. 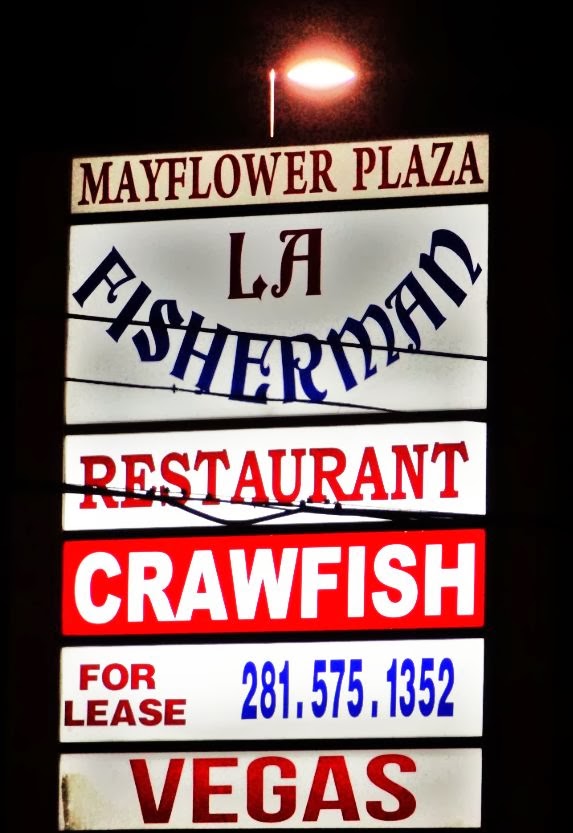 Posted by WOLFGANG HOUSTON WEST at 10:46 PM No comments: 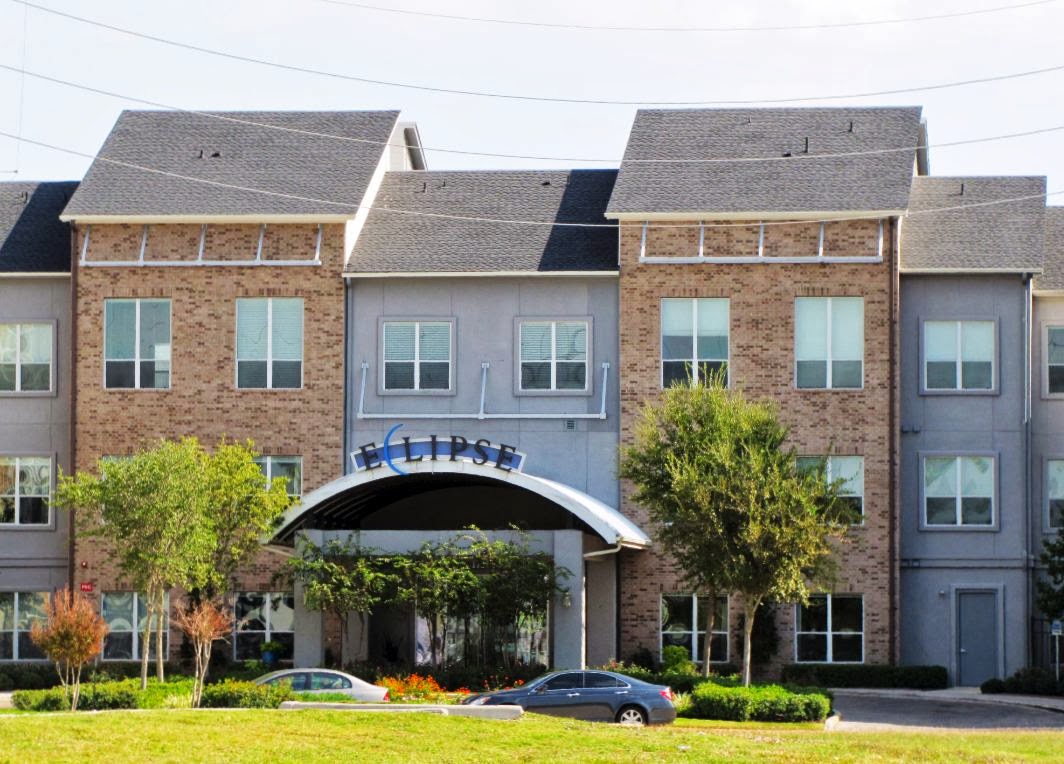 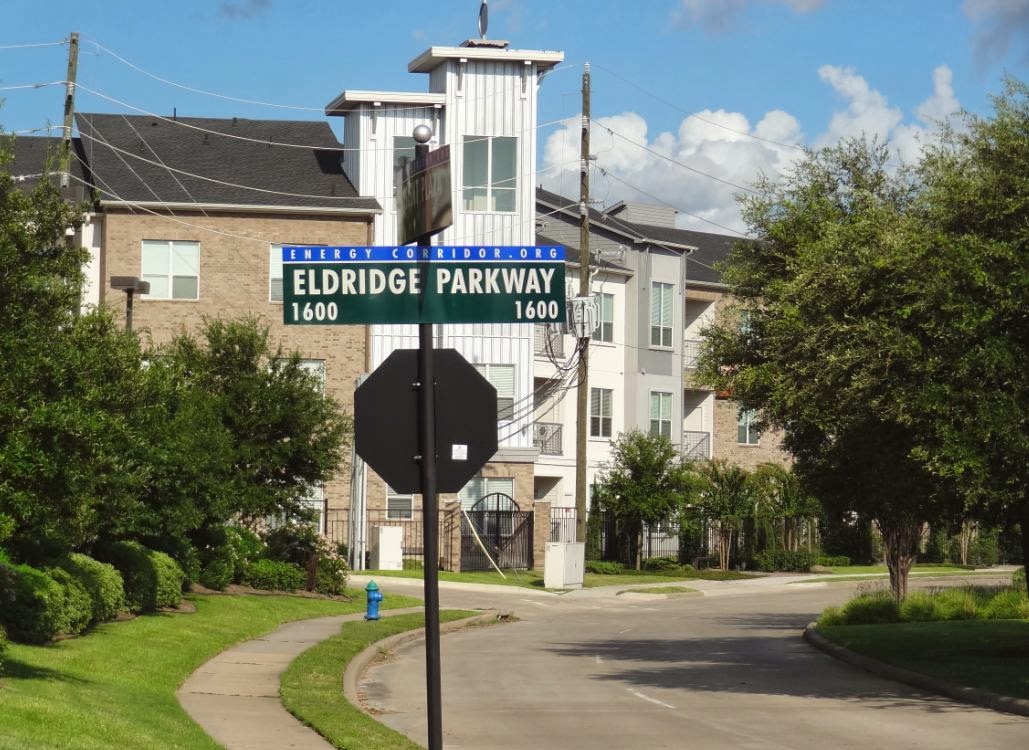 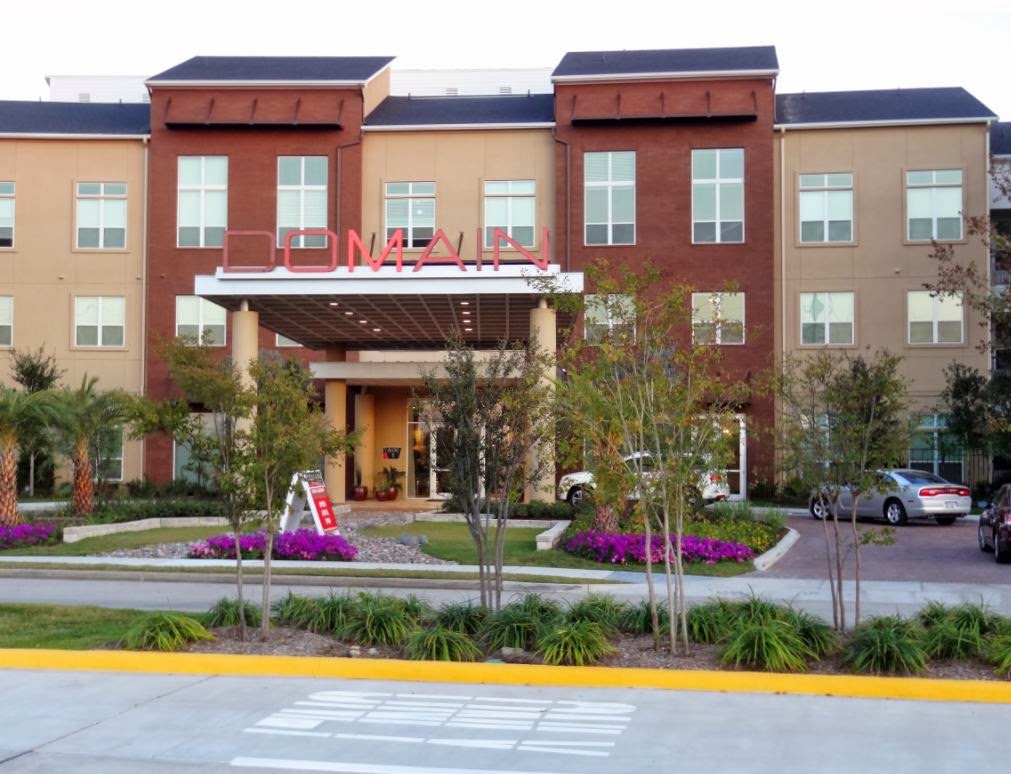 DOMAIN next to ECLIPSE (opened 2013)
across from Ray Miller Park 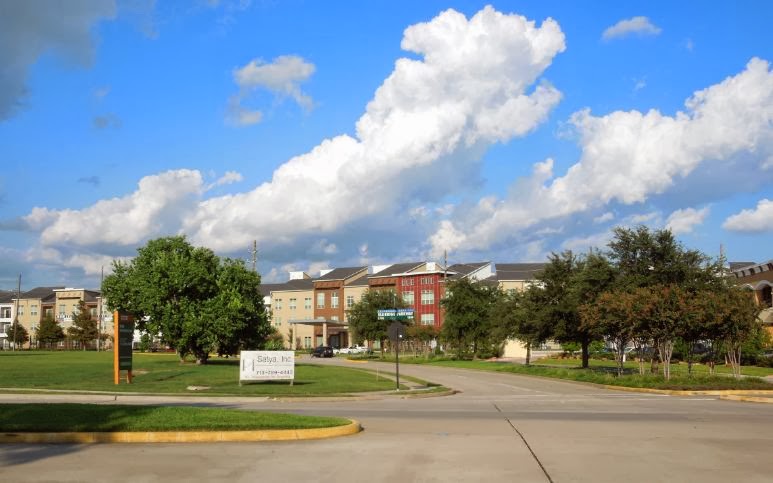 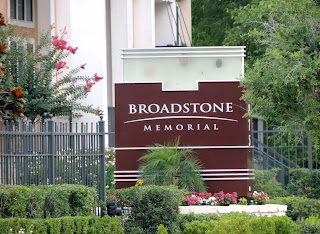 Broadstone Memorial
between Memorial Drive and I-10 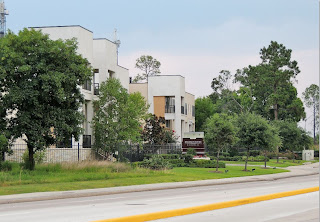 Posted by WOLFGANG HOUSTON WEST at 10:45 PM No comments:

Posted by WOLFGANG HOUSTON WEST at 10:44 PM No comments: